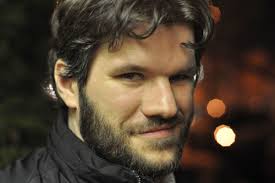 How long did it take you to write all the stories in your collection?

The primary writing on Cataclysm Baby took almost exactly a year, I think. And then I edited it off and on over the next year or so as it moved through the publishing process.

Did you have a collection in mind when you were writing them?

I didn’t think of them as separate pieces for very long—I realized I might be writing a novella-in-shorts after just one or two of the sections were written—so they were mostly written knowing that they’d be in conversation with each other. Once I had a full draft of the book, I worked through it end to end, across story lines, trying to edit them as both individual stories and as parts of the novella they were meant to be read as.

How did you choose which stories to include and in what order?

The stories were always part of this project, so there wasn’t the normal kind of selection process that a more traditional collection might have. And their titles run in alphabetical order, so they were often written into specific slots in the order, rather than ordered after the writing was finished.

What does the word “story” mean to you?

I think at this point I’m less interested in how a story is defined and more interested in what a story might do: how it might be made to move the reader emotionally and intellectually and morally.

Do you have a “reader” in mind when you write stories?

The first task when I’m writing is to move myself, to create a space in which I might experience something new, might feel or think new feelings or thoughts. Later, during rewriting, I try to translate that experience into something that might do similar work on a reader. But I don’t think I have a specific person in mind when I’m doing that kind of rewriting.

Is there anything you’d like to ask someone who has read your collection, anything at all?

I’m always happy to hear from people who have read the book—I’d be glad to answer their questions, if they had them—but I’m not sure there’s anything I particularly need to ask them first: I’m happy to know that they’ve had a good experience with the book, but I don’t think I want to interrupt that experience with my needy questions.

How does it feel knowing that people are buying your books?

I’m incredibly grateful to everyone who has bought a copy of any of my books. It’s a humbling experience to have the books out there in the world, to know that strangers are giving them their time and attention.

What are you working on now?

The first time The Short Review asked me this question, I was just finishing a first draft of a novel—and now that novel, titled In the House upon the Dirt between the Lake and the Woods, is coming out from Soho Press in June.

What are the last three short story collections you read?

This entry was posted on February 10, 2013 by simonrichardson in Uncategorized.